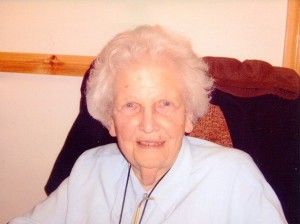 The words we have heard in the First Reading from the Book of Wisdom echo much of what one might want to say of Anne – or Matron, as she was known to generations of boys and staff, in the school, where, for forty years, hers was the heart-beat of that establishment. Arriving in 1952, into the cheerful austerity of the Matthaean régime in the school, she readily identified and generously fulfilled the maternal role which became hers, until her retirement, in 1992, a role which she exercised particularly to the boys, but also to the many girls who helped her to keep the domestic side of the school functioning. Indeed, she filled that role for numbers of the monks, too. Abbot Patrick, who would be standing here, but for unavoidable obligations in Maredsous, told me that, even on a recent visit to Anne, she remarked to him, ‘I don’t like your haircut; it doesn’t suit you’. So unaffected was the immediacy of her interest and her concern in everything that had to do with this place, to which she had effectively devoted her life.

Virtuous in this life she has been, as anyone who knew her can attest, teaching by example, in this school of the Lord’s service, the ways of integrity and truth and selfless generosity. While she had no hesitation in correcting a boy who over-stepped the mark, striking the fear of God into many a malefactor – whether boy or house staff – she was effortlessly hospitable to boys and parents alike, after hours, as it were, in those nocturnal sessions in Matron’s Room.

Put to the test she certainly was, in ways which were, by turns, dramatic and comic, the more so for being unintentionally hilarious; indeed the cache of stories of her sayings is a treasured element in our folklore. While the vast majority of her time and effort was taken up with running the house, there was a brief, but precious, episode when she was involved in the classroom work of the boys, teaching cookery in the Home Economics course. It entailed a kind of recognition which was very precious to her.

In all that, hers was a life of devotion; to God, to family, to her professional work in this place and to her myriad friends. Indeed, it is not too much to say of her that, as St Benedict puts it in his Rule, of the monk who has stayed with the discipline of community life, her heart was enlarged so that she ran with unspeakable sweetness of love in the way of God’s commandments.

Retirement from the school meant the pursuit of a series of new interests, starting with Bible study and prayer, which involved her in a serious journey of exploration and deepening of her Christian faith, along with many other activities which brought her into a new and deeper contact with the people and activities of the locality. At the same time, she delighted in the continued possibility of hospitality in the Back Lodge which she had refurbished and furnished to receive all comers. These were idyllic days for her; and she was loath to give them up. But, when she had to, she quickly adapted to the very different life of the nursing home at Milbrae Lodge, where the warmth and kindness of the staff compensated for the inevitable loss of independence.

Many of you here could entertain the company with a catalogue of reminiscences; but that is not our primary purpose, for the moment. We are here as representatives of the Church on earth, to plead Anne’s cause before the Court of Heaven, in pursuance of that “hope which is not deceptive, because the love of God has ben poured into our hearts”, as it was poured into Anne’s heart. It is our task to attest that she was, indeed, a woman of great faith and great hope, such that enabled her to live a life of unmeasured kindnesses.

Of the several beatitudes which might be applied to her, I think the one most immediately applicable is that of the pure of heart. While she was necessarily discreet, although being privy to many secrets, she was utterly loyal, utterly without guile, in matters which touched friendship and her relationship with God. She needed and wielded considerable guile of a different kind, in order to fight her corner, in this world of men. But in all else, hers was an open and generous heart, which embraced all ages and conditions of people.

And so let us pray that, along with the pure of heart, she may thrill, for all eternity, with delight in the vision of God. May her gentle soul rest in peace!